Living in Barcelona for 5 years now, I’ve visited a lot of the local staples that make the city one of the most popular tourist destinations in Europe. Each time I see something new, an excitement and a renewed appreciation for calling Barcelona home stir up inside of me.

The same thing happened again when we finally made it a point to visit the Reial Monestir de Santa Maria de Pedralbes.

Sundays are sacred in Barcelona, and not just in a religious sense. Sundays are meant for family time and relaxation. Most businesses close completely to take advantage of the day. The only establishments that seem to be open, excluding in the city center, are supermarkets, cafés, restaurants and museums.

On Sundays at the Monestir de Pedralbes, visitors can gain access for free after 3 p.m. Luckily for us, we were able to get in free beforehand, using the “Gaudir+Barcelona” membership. As a recommendation, if you want to fully enjoy the visit, try to enter before the 3pm crowd. There are other options to enter free; click here to check out how.

The first thing you encounter, visually, upon entering the monastery is the courtyard garden. Not to take anything away from its beauty, but the sight of the luscious, green park surrounded by the Catalan gothic archways won’t be what strikes you most. What you won’t be able to ignore is the powerful, albeit surprising, silence that greets you. It’s as if you’ve set foot inside of a massive soundproof booth, and, for added measure, there’s an overwhelmingly calming energy that accompanies the quiet. Before you continue on your way to take in the many spaces and exhibits the cloister has to offer you, make sure to take time to sit down and let the peacefulness of this place soak in.

Now that you’ve been invigorated by the monastery’s almost-700-year-old spirit, you’re ready to fully appreciate the walk through its history. The order in which you visit the different areas doesn’t matter much, but the guide suggests a counterclockwise path around the cloister. This will lead you to St. Michael’s Chapel first, followed by Queen Elisenda’s tomb. At the first corner, you can climb some stairs and view “The Monastery Treasures,” which is exactly that: a collection of art, furniture and both secular and ceremonial objects collected over the centuries by the Poor Clare Nuns who reside at the monastery. My favorite pieces of the collection were the “Mare de Déu de Montserrat amb Santa Eulàlia” painting by Josep Maria Tamburini and the “Custòdia” by Oliver i Aragonès.

The stretch that leads to the next corner, where there is a temporary exhibition, offers a glimpse into the daily lives of the nuns who have inhabited the monastery. After viewing the temporary exhibition, climb the stairs to see some of the more important rooms, including the Queen’s Room. The second floor gives you a beautiful view of the monastery, especially of the garden below and the bell tower of the church. It also provides you with a better sense of scale; the space is much bigger than it appears to be from the outside. If you want to take some photos, selfies even, this is a great spot to do it.

The rest of the floor houses more rooms to investigate, including the “Skylight rooms,” which present a unique view of Barcelona, and even more details to take in despite half of the floor being off limits.

Now it’ll be time to go back down to the ground floor to finish your tour. It may be the final stretch of the cloister before leaving to access the church, but there is quite a bit to see if you take the time. Aside from the grand refectory, kitchen and mini exhibitions about the history of the culture and daily life within the monastery, the best areas to spend time are the garden, with its seating area near the Fountain of the Angel, and the abbey, with its original paintings and frescoes.

The garden is as tranquil a garden as you will find in Barcelona. As mentioned before, it has a serene silence that is only interrupted by the dripping water of the fountains or the chirping of birds. It’s nice to sit here to reflect on everything you’ve seen and read before leaving. 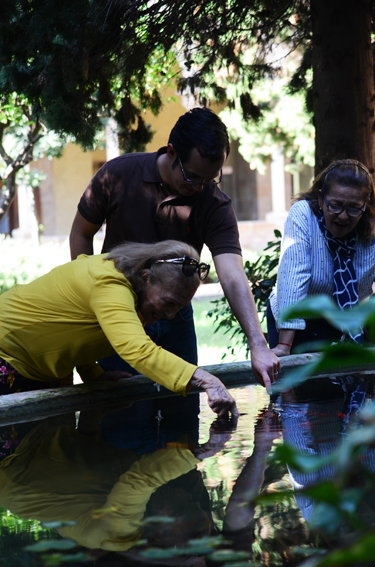 Once you’re finished inside the cloister, make your way out and to the left to visit the church. The second you step inside, you might feel as though you’ve seen it before. It has a striking resemblance to one of Barcelona’s most iconic churches, the Santa Maria del Mar. I found out through some research afterwards that this is for good reason: Berenguer de Montagut and Ramon Despuig, the architects of the Santa Maria, helped work on it. And, once again, it’s so quiet and still inside that you feel like time has stood still.

As I left the monastery grounds, the details that stuck out from the two-and-a-half hour visit were the many colorful tiles contrasted against the amber brick floors, the beautiful stone arches, the well-preserved artwork, the smell in the air and the feeling of peace inside. You can tell that a lot of work has gone into keeping this centuries-old building maintained and protected and, thanks to that continual effort, you truly feel as though you’ve walked through to pages of history.