One of the first places people usually visit when they come to Barcelona are Las Ramblas. Consequently, many will notice the famous Canaletes fountain, which was installed in 1888, situated at the top of the Ramblas. The two things people mention in relation to this drinking fountain are that a) it’s where Barça fans come to celebrate the club’s victories, and b) if you drink from the fountain, you will always be a lover of the city and, no matter how far away you travel from it, be destined to return.

Tourist drinking from the Canaletes fountain

What a lot of people probably don’t know is how it got its name or how it came to be standing where it is today.

The origin of the name goes all the way back to the 14th century when Barcelona was still confined to its medieval walls. Its western wall ran down along where the Rambla — a sewage-filled stream at the time — is located. Back then, the city’s drinking water supply came from the Collserola mountains and the Besòs River. In order to channel that water to the city, two aqueducts were built. From these aqueducts, which were located where Plaça Nova now stands, a system of pipes and tanks was installed. The piping that diverted water from Porta de l’Angel over to the Portal de Sant Sever — where Carrer de Pelai meets Plaça Cataluyna today — supplied water to the Ramblas area and to the Raval neighborhood; this was a time when the Raval, largely occupied by small farms and fields, was being fortified by new walls. The towers at Sant Sever were named the “Torres de Canaletes.” The Catalan word “canaletes” is the diminutive of the word “canals.” So, “canaletes” literally means “little canals.” It’s believed that the name was given to the towers due to the water flowing through the many channels that passed beneath it. 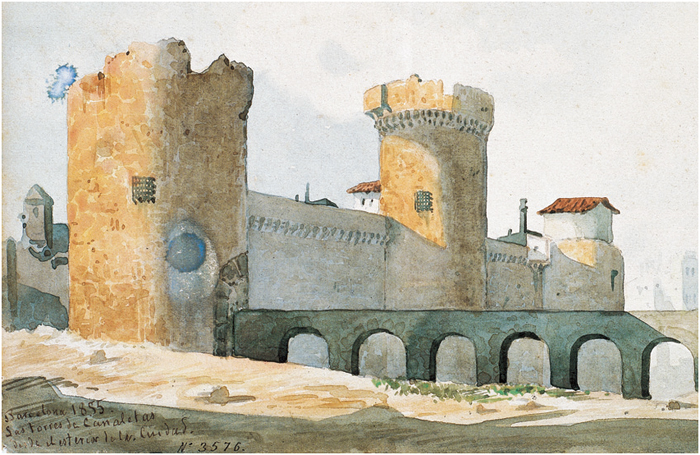 The fountain’s history is tied to the Torres de Canaletes. In 1536, a higher education building was constructed near the towers to unite all of the university centers in the city; the university was named the Estudis Generals. It would serve as a university until 1717 when Felip V issued a decree to close down all Catalan universities. Instead of demolishing it, the building remained and was used as an artillery barracks, its towers serving as a military prison. The courtyard of the building had a fountain that would still be standing even after the building and towers were torn down in the mid-19th century — this was when Barcelona’s walls were demolished to allow for expansion. That fountain, referred to even then as the Canaletes fountain, occupied the same site as today’s Canaletes. The city would later decide to replace and update it for the Universal Expo of 1888. That fountain is the one you can see today.

If you’re wondering how the tradition of celebrating FC Barcelona victories started here, we’ve got that information for you as well. Back in the 1930s, after the team’s matches concluded at Les Corts Stadium, fans would rush to Las Ramblas in front of where the daily sports newspaper, La Rambla, had its offices. This happened to be right in front of the Canaletes fountain. Culés knew that the football discussion for the day didn’t end with the final whistle. It continued on over at the offices because this was where the newspaper’s journalists would post live results from other league matches on boards for eager eyes to see and deliberate. Radios weren’t that popular yet, so if you wanted to be informed, you headed for the Canaletes. Even after the newspaper was forced to close in 1939 due to Francoist censorship, the culés would continue to gather at the fountain.