One of the most frequent questions in my house back home was, “Did you have a good poop today?” (Sorry for putting that out there, guys.) This aspect of my family would probably endear us to Catalans.

As we already talked about in the last story, “El Tió de Nadal,” there seems to be a fascination with crapping over here, especially at Christmastime.

Nothing embodies this fascination better than the caganer (“crapper”).

Back in 2014, when I got to experience the Christmas preparations in Barcelona for the first time, I remember how amused I was when I discovered the caganer stalls at the Christmas market. The shelves were filled with so many different pop culture personalities: movie characters, football stars, politicians, musicians, actors, artists, etc. Each of them were crouched down with their pants dropped, bare butts hanging out, and a fresh pile of crap sitting on the ground below them. I fell in love with them right away! 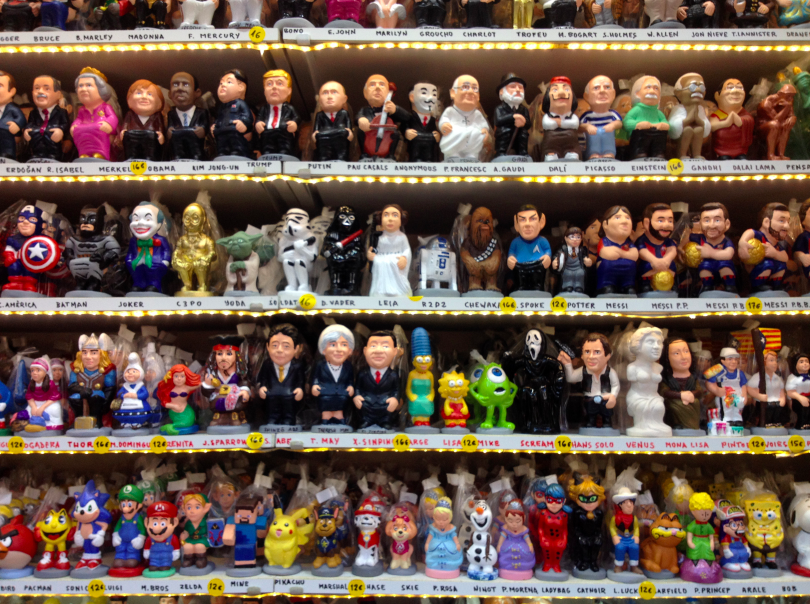 These beloved “poop guys,” as my nephews back home now call them, are a staple of Christmas in Catalonia, and they’re put on display in the nativity scenes.

We have to go back quite a ways — somewhere between the 17th and 18th centuries — to arrive at the answer, even though there is no concrete evidence as to where he first appeared.

The caganer arrived on the nativity scene, it is believed, during the Baroque period, when there was an emphasis on extreme realism. This realism seeped into the still lifes and scenes focused on the customs and manners of the time. It was when work conditions as well as domestic and outdoor scenes became subject matter in art. Things that had been underappreciated before were suddenly being cast in a more dignified light. In Catalonia, the focal point was on rural life, and the caganer was stongly linked to it; the traditional caganer is a farmer dressed in a barretina (typical Catalan hat), a white collared shirt, a faixa (a thick, red sash) and black trousers, usually smoking a cigarette or a pipe. In his act of defecation, the crapping farmer is simply giving back to the land what he has taken from it. Amongst the more standard nativity characters, the caganer does tend to stick out. He’s a rambunctious figure, which is why he’s not to be placed in the manger but rather off to the side somewhere. His presence is a must, though, because he symbolizes prosperity and health and is said to bring a year’s worth of good luck and joy to those who include him in the scene. Children love him, which likely doesn’t come as much of a surprise, and it is a tradition for parents to mask his location each year so that the kids have to look for him until someone spots him.

The caganer has become so beloved that, back in 2005, when the Barcelona city council exhibited its annual nativity scene, there was a public outcry because they failed to include him. The city’s claim was that, since public defecation and urination was against the law, the caganer was excluded so as not to set a bad example. Well, Barcelonians found that unacceptable. There was a widespread media campaign against the decision, the slogan being, “Salvem el caganer!” (“Save the crapper!”). The following year, consequently, the caganer was granted a spot near the manger.

The lesson was learned: Don’t mess with Catalan traditions, especially not with the caganer.

The affection that both children and adults have for the caganer here is indisputable. That fondness has spread internationally, as tourists come specifically to get their hands on them. Just take a look at the caganer stalls at the Christmas market. They’re usually the most crowded, with locals and tourists alike, because the caganer artisans always unveil new characters each year and people want to get a peek. Plus, just by looking at them, you can’t help but smile! 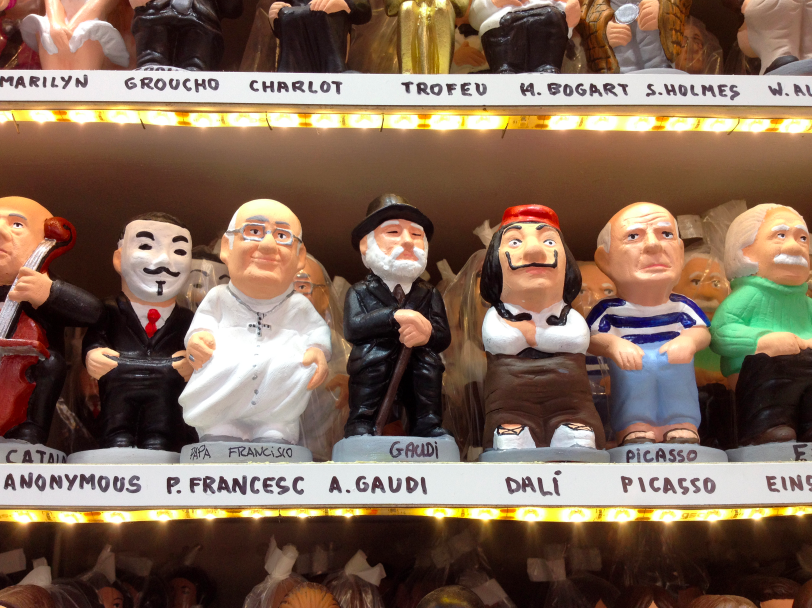 If you’ve run out of ideas for presents to give this Christmas, gifting a loved one a caganer could serve as a great solution. Speaking from experience, it will leave a lasting impression!