Last week, we had the pleasure of attending the Animated Short Film Competition at Mecal 2019. Not only that, we had the chance to sit down with the director of one of the 47 competing shorts: Gerlando Infuso, from Belgium.

His short film, “La Bague Au Doigt,” which uses stop-motion and has a 15-minute running time, is Infuso’s fifth and has him considered as one of Belgium’s most promising animation directors. The film won him the Les Magrittes du Cinéma award for Best Animated Short Film in February.

“The Proposal” is set in 1930s Brussels on Valentine’s Day, and its protagonist has decided to propose to his girlfriend at their favorite restaurant. There are a few twists in the plot, including the jealous chef who tries to prevent the proposal from happening, which leave the audience spellbound and laughing. The attention to detail in the film is incredible, and the idea to use an original score as the dialogue worked beautifully and effectively and gave it the air of an old silent film.

Infuso told us that it took two years to make the film, with 14 months dedicated to the animation alone. It’s tedious work, as he says, especially considering that he designed and created everything except for the music.

When asked if this was his first time in Barcelona, the Belgian director told us that it was actually his second, as he was here four years ago to present his film “Les pécheresses” (“The sinners”) at Mecal. He was a bit disappointed in the weather this time around, which, instead of the typical sunny, warm climate, was grey and cool just like back home for him. He did add that it was better than being in a small room parked in front of his computer, editing. Plus, he says he really enjoys the festival circuit because he gets to show his work, meet a lot of talented people and get filled with creative energy and inspiration.

Mecal 2019 happens to be his 14th stop on the festival tour, and he doesn’t travel alone. He brings one of his film’s protagonists, the waitress, who he described as a totally unprofessional, middle-aged woman who thinks she’s 12 years old, with him. Infuso even let us hold her while he talked to us about his film. 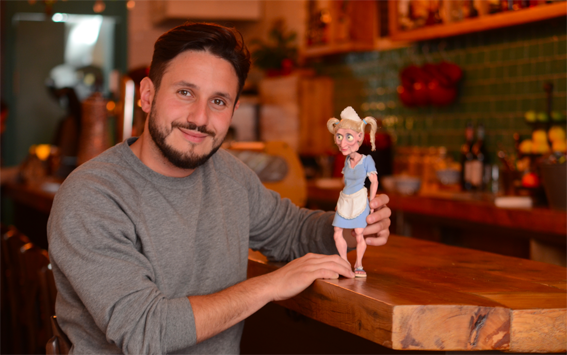 One thing was made crystal clear about the 32-year-old director as he spoke to us for about a half an hour, grinning from ear to ear: he’s a talented, humble guy who is passionate about what he does. He is aware that he could easily have more people on board to help make his films “even better” than what they already are, but he prefers working with less because his vision comes through clearer, and, he added, the finished product ends up being a good indicator of where he is in both his personal and professional life at the moment.

Based on what we saw in “The Proposal,” it seems that Infuso is currently in a great place and undoubtedly will have more exciting things to come in the future.