The month of April in Catalonia is one filled with reasons to celebrate, and not just because spring has fully sprung (not the case this year, but who’s complaining?). No, April also brings Holy Week, which means vacation time for kids and some of us adults, and it brings the celebration of Catalonia’s patron saint: Sant Jordi, or Saint George. 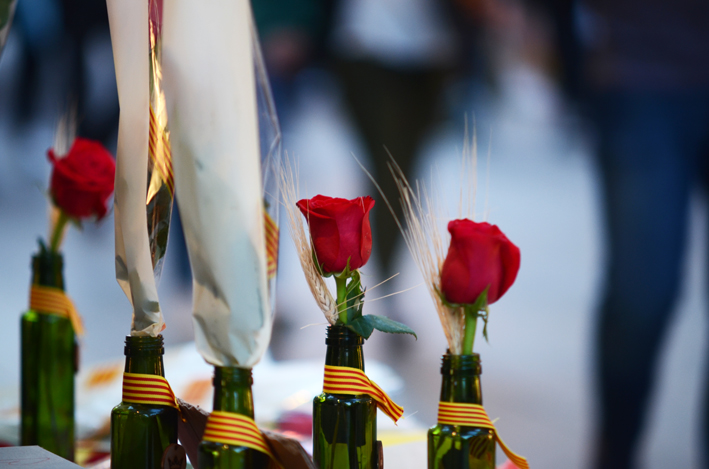 The Diada de Sant Jordi (Saint George’s Day), which falls on April 23rd, is one of the most energetic and positively endearing days of the entire year. It’s a day that I, and most Catalans, look forward to with great excitement. It would be too easy to say that this holiday is like a Catalan Valentine’s Day. It is a day to celebrate your loved ones (Lover’s Day), sure, but, what’s more, it’s World Book Day. 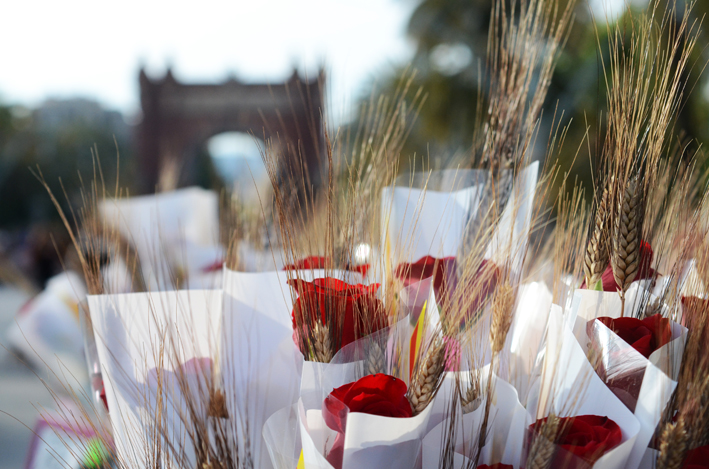 If you’re lucky enough to be here in Barcelona, you will come across streets everywhere that are filled with stands selling books and roses, as well as a positive energy that seems to paint Barcelonian faces with smiles. It’s contagious, too. You’ll end up taking the time to really appreciate the environment on the streets, grinning as you do. You might even end up in danger of overextending your lunch break due to getting caught up in the action.

If you expect to walk Les Rambles on this particular day, think again. The long promenade is flanked with tables on both sides and packed with people who are studying book titles, discussing the rose offerings (“Which color shall we buy?”), and exhibiting public displays of affection. In short, you cannot walk at a steady pace. Don’t be that person, though, the one who groans and rolls his or her eyes. Soak it up! 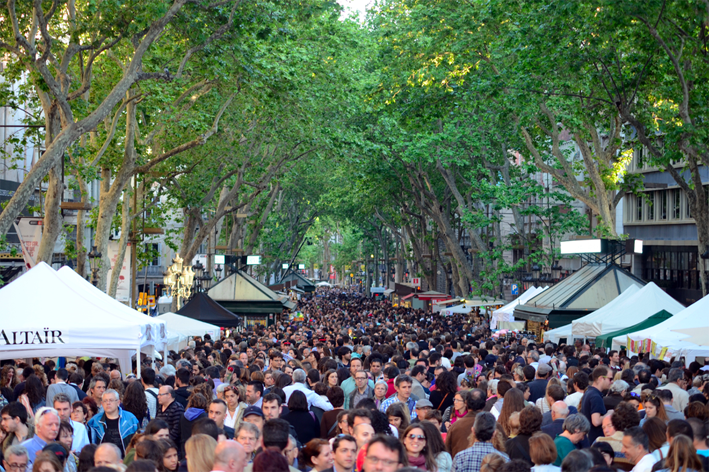 While you’re at it, get yourself well-versed on the legend of the patron saint.

THE LEGEND OF SANT JORDI

As Catalans tell it, a long time ago, in the village of Montblanc, there was a dragon that was terrorizing the villagers. Having settled itself in on the outskirts of the small town, this colossal dragon infected the air with its repulsive breath and gorged itself on the village cattle.

There were only so many cattle to satisfy its beastly appetite, and, so, the dragon began to move in closer towards town. This had the villagers in panic mode. They had to take action quickly before the monster came for them. 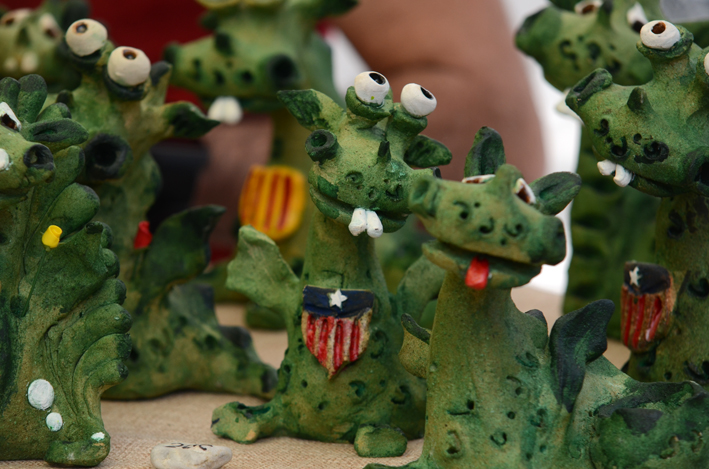 First, they fed it sheep. Once those ran out, they began offering it oxen. Those were in short supply, so then it was on to horses. As the horses began to dwindle in numbers, the villagers had to confront a horrible truth: they had to begin to sacrifice some of their own. But how to go about it?

It was decided that every villager would put his or her name on a piece of paper, including the king and his daughter, the beautiful princess. The papers were then put into a large pot and mixed. Each day, a designated villager would extract one name from the pot and that selected individual would become the dragon’s meal.

After several days, thus several human sacrifices, the moment arrived when the princess’ name was drawn. The king was beside himself. He wept and wept, and then he begged his servants to take her place. The king was forgetting that some of them had already lost a loved one to the belly of the beast, and so there was no pity shown to him nor to the princess. The king was forced to say goodbye to his one and only child, and off she walked to confront her fate. Well, as you might have guessed, this was the moment when a hero must swoop in and save the day. And who would this story’s hero be? Saint George!

No one knows for sure where he came from, but came he did (and what timing!). On a white horse, and dressed in white clothing under silver armor, Saint George emerged from the mist to attack the dragon before it could claim its royal prize.

The element of surprise served the hero well, and he was able to slay the dragon. When it fell to the earth, legend says that on the spot where the blood spilt from the dragon’s belly, a rosebush grew, producing red roses. Without hesitation, Saint George plucked one and presented it to the princess and, not wanting anything in return, he galloped away, never to be seen in the village again. This is one of the reasons that Saint George is considered the saint of chivalry and nobility.

Everyone here knows this legend. They even teach those of us foreigners who register for Catalan classes the story. Not only that, but references to Sant Jordi can be found all around the city, chiefly among them being Antoni Gaudí’s Casa Batlló.

The iconic Casa Batlló holds a secret that many people might not be aware of. Gaudí used the project to visually depict the legend of Sant Jordi on its façade. Take the time to study it. The roof itself is the slain dragon. You can see the scales of the dragon, Saint George’s sword piercing its back and the dragon’s eye; if you happen to be standing on the rooftop and look through the eye, you’ll have a perfectly framed view of Gaudí’s most famous work: La Sagrada Família. The balcony at the top of Casa Batlló’s façade is shaped like a rose, which is an allusion to the princess. On the other balconies, you can see skulls that represent the villagers who were sacrificed; their bones are represented on the pillars of the windows at the bottom of the façade. In the entrance of the house, the staircase was modeled to represent the dragon’s tail. On the top floor, the arches in the hallway are meant to be the dragon’s ribcage. 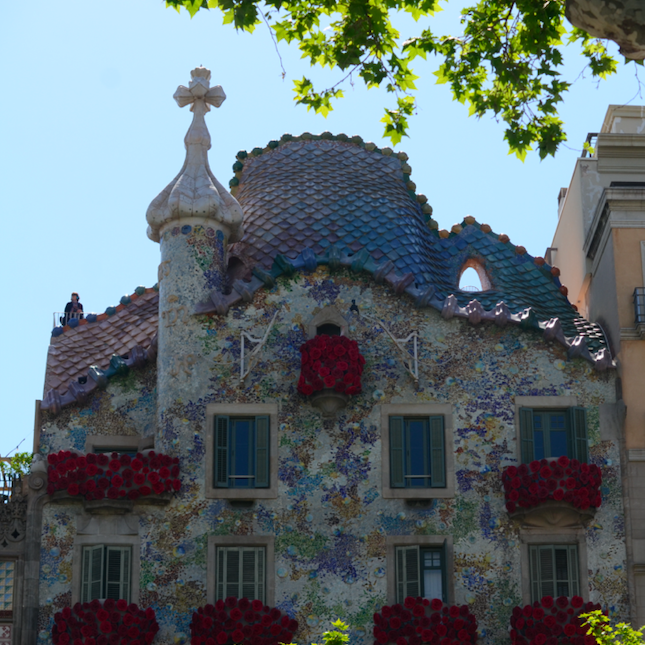 As you can see, Gaudí went to great and creative lengths to memorialize Sant Jordi’s legend. If that’s not proof enough of the saint’s importance, you can find other representations of him at the following locations:

These aren’t the only places you can find the saint, but they are the most well-known. Perhaps the next time you take a stroll around the city you’ll be able to spot one of the others.

WHAT TO DO ON SANT JORDI

To celebrate Sant Jordi, it is customary for men to give women roses and for women to give men books, but that’s old news. Nowadays, men and women both give and receive books and roses. And the exchange doesn’t need to be romantic in nature. Many parents give roses and flowers to their children. Many friends give them to each other. Barcelona also hosts the Sant Jordi Musical, a day’s worth of free concerts — if you’re patient enough to wait in the long line to gain access — that is habitually held at the Antiga Fàbrica Estrella Damm.

In honor of World Book Day, the city provides book signings around town for fans to meet their favorite authors.

The free events don’t end there.

You will find cultural activities held around Barcelona, too. Check out the agenda here. 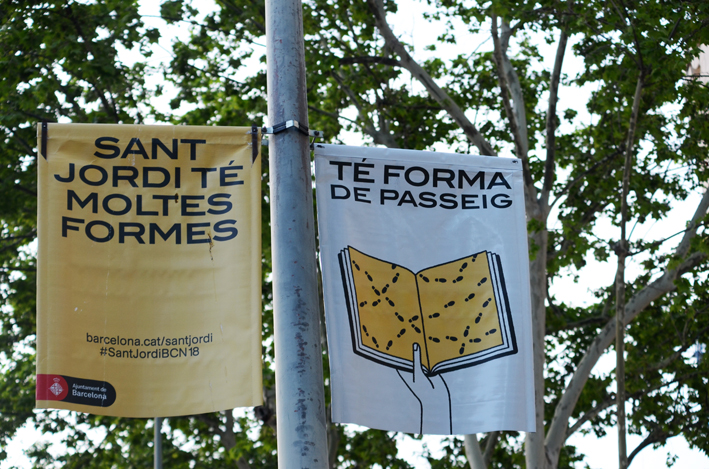 And, just as the dragon did, although unwillingly, you can donate blood on Sant Jordi! If you’d like to do so, here’s a link with the information.

With so much to see and do, you really won’t want to miss out on such a dynamic, vibrant holiday. If you have to ask for the day off, or just for a longer lunch break, do it. You won’t regret it.