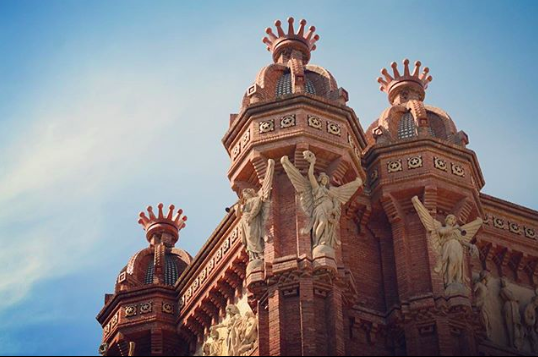 The Arc de Triomf was erected in anticipation of the 1888 World Exposition of Barcelona to be used as the event’s entrance. It now serves as a commemorative monument of that momentous event, as it was the first time Barcelona was made visible to the world— it also happened to be the first time a World Expo had come to Spain —and provoked many changes around the city. Just over 100 years later, in 1989, it required restoration.

Josep Vilaseca i Casanova was its architect, but the archway also features many sculptures which aren’t attributed to him. A frieze by Josep Renyés represents Barcelona receiving the participating nations of the exhibition. Another frieze, by Josep Llimona, located on the opposite side of the archway, represents the distribution of rewards to the participants of the exhibition. On the right side of the arch, Antoni Vilanova presented an allegorical reference to industry, agriculture and trade. On the left side, Torquat Tasso presented the arts and sciences.

In each of the corners, a winged Fame, of the twelve “Fames Alades,” by Manuel Fuxà and Pere Carbonell, was placed to symbolize Barcelona’s presence around the world; thus, reaching every corner of the world.

Along the archways, you can find the coat of arms of each of the 49 Spanish provinces. In the center, on both sides, is Barcelona’s badge, larger than all of the rest.

Unlike other triumphal arches around the world (Paris, London, New York City, etc.), this one doesn’t commemorate any military victory. It is also unique in that it’s not made of stone but brick.

What is most interesting is that amongst all of the ideas for the construction of the entrance for the 1888 World Expo, one of the rejected plans was that of Gustave Eiffel which just happened to be the project he presented for the 1889 World Expo of Paris. The rest, as you know, is history.

Now, with La Diada coming up, along with the Festa Major de la Mercè, Arc de Triomf and its promenade will fill up with Catalans, curious tourists, the Catalan flag, live music, and food and drinks. If you haven’t gotten to know this iconic Barcelona landmark, September is great month to do it!