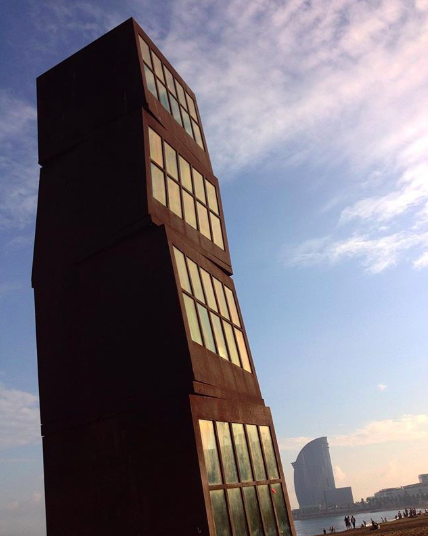 This sculpture, by the German artist Rebecca Horn, was commissioned for the 1992 Olympic Games and is emblematic of the modern day Barceloneta. Horn fashioned it as an homage to the Barceloneta neighborhood of old, when it served as the city’s fishing village. Due to the construction of the Citadel Fortress (now Parc Ciutadella) in the early 1700s, many residents were forced to find lodging in the Barceloneta. Most of those who were already living there were fishermen and gypsies, and their homes were shanties that covered the area. Those shanties were knocked down and hundreds of one-level, multi-windowed houses were built. The restaurants, which were more like chiringuitos, or “open air restaurants,”  and which were famous in their day, were also knocked down due to their unsanitary nature.

Thus, the “Wounded Star” is a visual meant to evoke the history of the Barceloneta, from its humble beginnings to its first major makeover through to its last renovation before the city hosted the 1992 Olympics.