November through April is calçot season in Catalunya, when thousands of Catalan people gather to eat calçots on the weekends. A variety of scallion, or spring onion, native to Catalunya, calçots are grilled on a roaring fire and eaten in a riotous and messy celebration of spring called the calçotada. 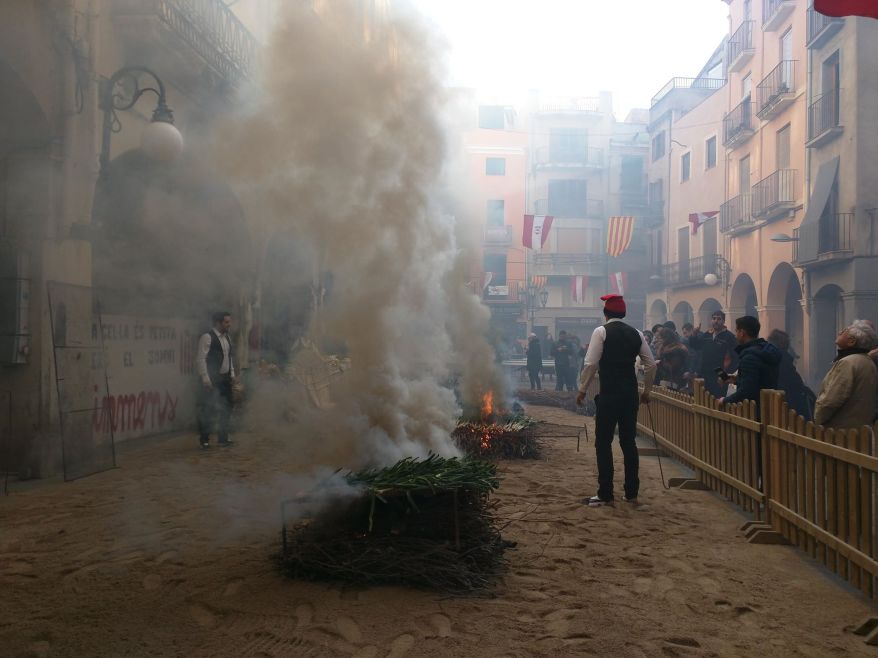 The famed calçotada in Valls

The origins of the calçotada are disputed. A Roman cookbook from the 1st century AD gives several recipes for porrus capitatus (literally “leek with a head”), including one recipe that calls for grilling it. And a recently discovered Roman mural painting from the beginning of the 3rd century AD portrays a slave eating what looks suspiciously like a calçot. But the origins of the calçotada celebration as we know it can be traced to the town of Valls.

At the turn of the twentieth century in Valls, Tarragona (also known for being the birthplace of castells), it’s said that local farmer Xat de Benaiges planted some onion sprouts, covered them with soil, grilled them to a crisp and then discovered they weren’t half bad. Gradually the tradition of eating calçots expanded until it became an integral part of spring in Catalonia.

Growing calçots is somewhat labor-intensive, as they must be planted months before the harvest and continually covered with soil so that part of the stem will stay white. In fact, the name calçot comes from the Catalan verb calçar, which means to put shoes on, or to cover the bottom of a plant.

When the calçots are ready to eat, they’re thrown on a roaring fire of vine shoots and cooked until they’re charred on the outside, then wrapped in newspapers. Eating calçots is a messy business which involves holding up the calçot by the stem, pulling off the outer layer of the white part with the other hand and dipping it in salvitxada sauce. To eat the calçot you then tilt your head back and bite off the white part. By the end of a calçotada everybody’s hands are usually stained black and you’ll consider yourself lucky to have a bib!

The mild onion flavour of the calçot marries perfectly with the delicious salvitxada sauce, which is like romesco sauce, made with tomato, peppers, almonds, hazelnuts, dry bread, garlic, vinegar and olive oil. Each family has their own special recipe for this sauce and you’ll never find two the same! People eat stacks of calçots, accompanied by other grilled food such as lamb, botifarra, bread, potatoes, artichokes and of course cava or red wine, traditionally drunk from a porró.

Xat de Benaiges, the location for the calçotada in Valls

Calçots from Valls have a Protected Geographical Indication status, just like wine or cava. They’re a unique dish that’s definitely worth trying at one of the many calçotadas you’ll find all over Catalunya. You can choose from a swanky calçotada in a restaurant or masia, a laid-back neighbourhood calçotada or your own calçotada with friends and family at one of the public picnic areas outside Barcelona. And if you’re in Catalunya during the last week of January, be sure not to miss the calçotada in Valls where it
all started!